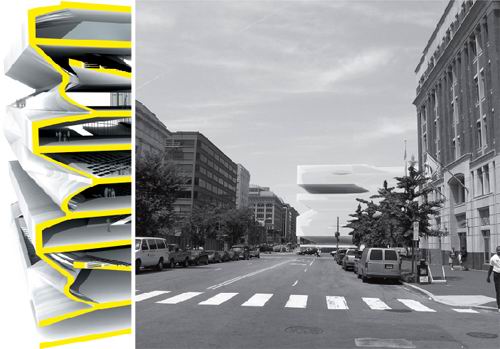 As a native of Washington, D.C., I have always been struck by the dichotomy between D.C. the "Capital" and D.C. as an actual working city independent of the federal government or of the monumental center visited mostly by tourists. I was interested in the possibility of creating a civic monument for the people and the city of D.C. distinct from the national monuments that most people associate with the city. 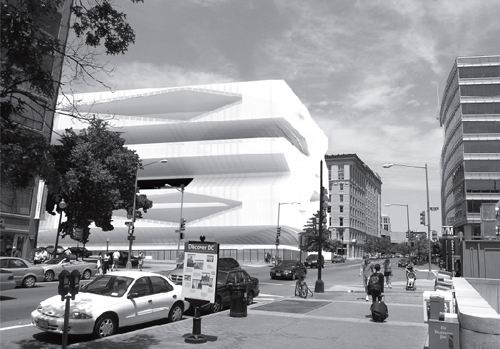 The question became, "How do you create a monument in a city that is already full of monuments?" The strategy I chose depended on the recognition that most of the monuments in D.C. adhere to certain aesthetic principals, most notably neo-classicism. They can be described as "ideological" in the sense that their meaning and symbolic value is derived from participation in an aesthetic system and its reinforcement through repetition in building after building. Thus, the neo-classicism of the White House becomes associated with the virtues of democratic government because it, like all the other major federal government buildings in the city, shares a certain aesthetic or style of architecture.

My solution to the problem of creating a distinctive monument that could take on civic value for the city itself was to use the lessons of iconography. But where iconographic structures such as the Statue of Liberty are buildings that have surrendered entirely to the need to take on a symbolic shape (and therefore, become the ultimate "ducks" in architectural parlance) I was more interested in newer projects whose abstract forms are simple enough to acquire symbolic value without explicitly denoting what they intend to symbolize.  Examples include the Seattle Public Library, Zebruggen and the Swiss RE Tower in London.  My critique of such projects, however, is that they tend to approach symbolic form by organizing program and then wrapping it with a thin skin of enclosure and structure alone. 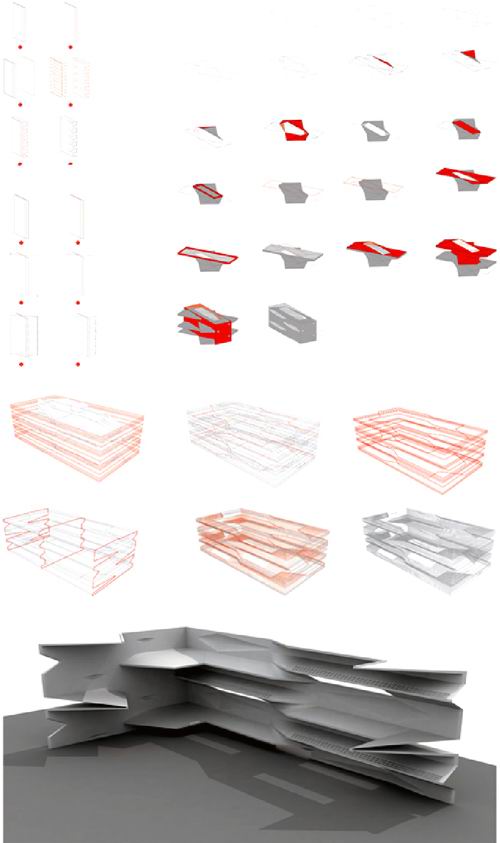 In this project, I attempted to exploit the possibility of "skin" more fully, by giving it greater "thickness."  My "thick skin" not only provides enclosure, structure and daylighting, but also participates in the program of the building by the inclusion of shelving and its ability to qualify interior spaces and programmatic zones within the building.  As a proposal for a new central public library, the project also gave me the opportunity to consider the library program carefully-in this case, I built on the idea of a thick skin by organizing the program into two categories:
1) continuous programs, most notably the book stacks and study carrels and
2) discrete programs such as offices, auditoriums and other support spaces.
The continuous programs have been organized into a ramped spiral which becomes part of the "thickened" skin, while discrete programs are stacked at intervals inside the spiral. In so doing, the project exploits the visual and aesthetic possibilities of the thick skin to create a distinctive, yet abstract form-a new symbol for the city. 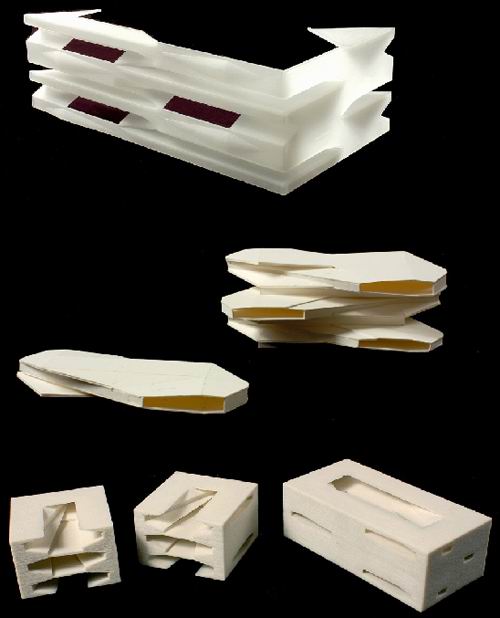 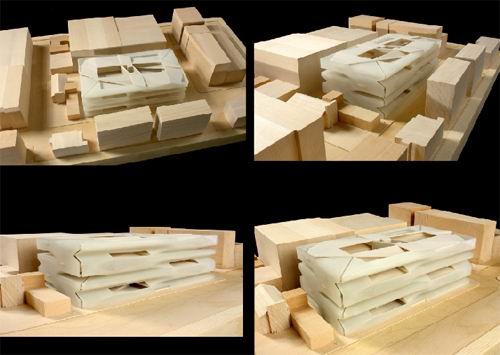 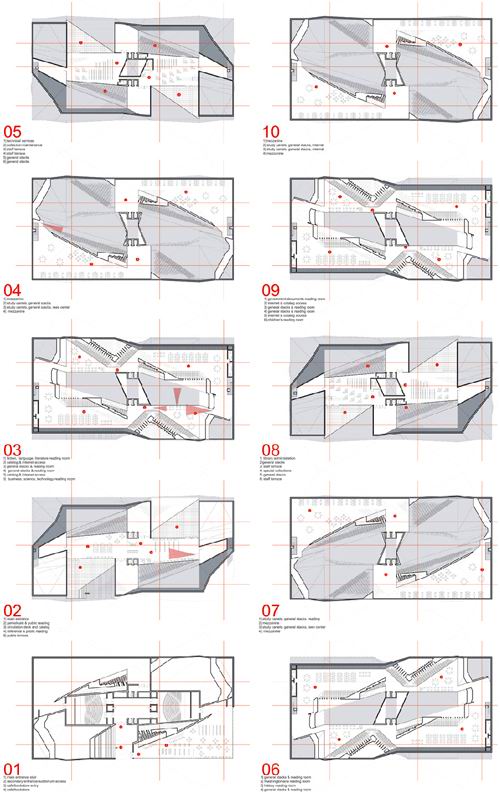 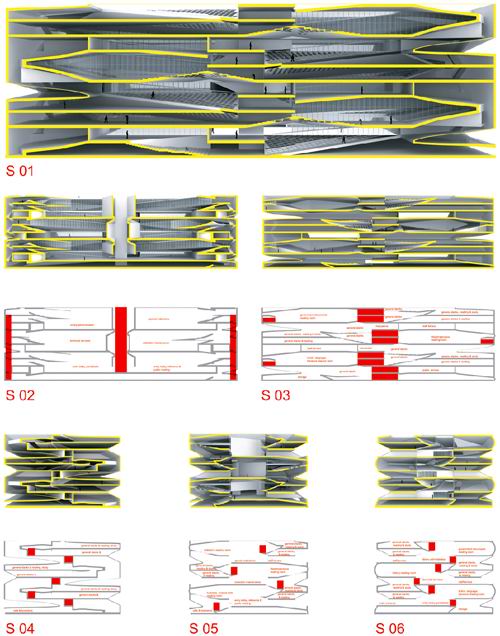 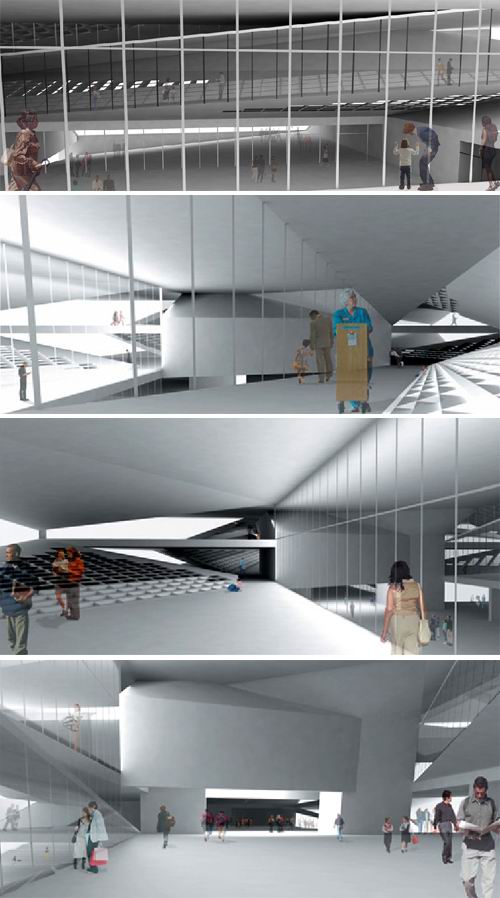